Last year, Congregation Adas Emuno was entrusted with the guardianship of a Torah scroll that survived the devastation of the Holocaust. Preserved for many years as a national treasure by the Czechoslovakian government, this and many other such scrolls were later acquired by the Westminster Synagogue in London, where they maintain a Czech Scrolls Museum, and administer a Czech Memorial Scrolls Trust program, whereby numerous Torah scrolls that were saved from destruction are loaned out to congregations such as ours.  As they explain on the Czech Memorial Scrolls Trust website,

The story of the acquisition of the 1,564 Czech scrolls, which arrived at Kent House in February 1964, has passed into history as a small but remarkable episode in the tragedy of European Jewry.

To those who were entrusted with the scrolls, they were a symbol of hope as well as sorrow, and also an intimate link with the individual historic congregations which were destroyed under the Nazis. Over the decades since the Scrolls arrived the racks have grown emptier as one Scroll after another has been restored to its rightful place in Jewish life.

Now the only Scrolls that are available for distribution are those that are returned for a variety of reasons. The Trust is now in the phase of ensuring that recipients remain aware of the unique importance of the Scroll in their care, and the special link it represents with the Jews of the destroyed congregations from which it came.

This particular scroll was previously cared for by Congregation Beth Am of Teaneck, New Jersey, one of our sister shuls here in Bergen County.  When Beth Am regrettably closed its doors last year, they generously passed this Holocaust scroll on to our congregation, along with many other gifts (not the least of which has been some wonderful new members), for which we are very grateful.

After receiving the scroll Rabbi Schwartz contacted the Trust to learn about the history of this scroll, and by way of response, they sent us a beautiful certificate that we have since framed and that hangs at the entrance to our temple.  Here is a scan of it: 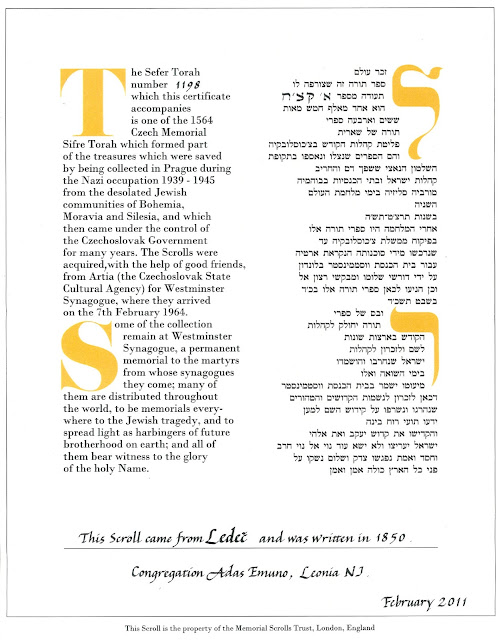 It is indeed a privilege and an honor to serve as guardians of this Torah scroll, which Rabbi Schwartz now uses for the portion of our B'nai Mitzvah ceremonies where a Torah is passed down from one family member to the next, to symbolize the passing down of our tradition through the generations. And the survival of this scroll, and so many others like it, is very much a cause for celebration this Simchat Torah. Chag Sameach!