Electric Menorah, a name for a popular music act?  Or a legitimate alternative to candles?  When I was growing up, we always thought electric Menorahs were tacky, for example: 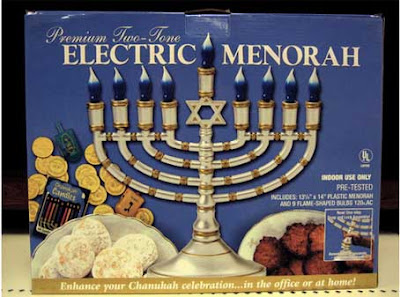 That's something that would be put up by an institution, a school, or in an apartment building lobby, along with the ubiquitous Christmas tree with its electric lights.  After all, it doesn't make sense to have something burning when there's no one to watch over it.  But for individuals and families to rely on an electric Menorah, that's like, oy!

Real Menorahs burn, like, with fire.  Mostly we use candles, but to be really traditional, you can use little bowls of oil, because that's what it originally was about, the burning of purified, sanctified olive oil in a lamp in the Temple, meant to symbolize the light present at Mount Sinai at the time the Torah was given.

And all of this is besides the point, except as a launching pad for me to introduce you to this cool video that brings an electronic, science fiction theme to Chanukah.  So let me present to you, Honika Electronica:

So, I wonder if this guy is related to Mel Brooks at all?
Posted by Lance Strate at 8:35 PM