Congregation Adas Emuno is a Reform synagogue and member of the Union for Reform Judaism, and our rabbi, Barry Schwartz, is a member of the Central Conference of American Rabbis, so it seems only appropriate to share the following press release dated January 28, 2017. It can be found on the website for the Religious Action Center for Reform Judaism, entitled Reform Movement Denounces President Trump's Executive Order Barring Entry From Several Muslim-Majority Countries. Whether you agree with this statement or not, it is important to be aware of the position taken by the national organizations that we are affiliated with, and that represent our movement. 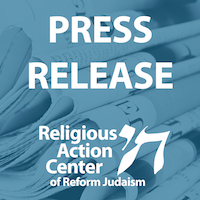 WASHINGTON – In response to President Trump’s executive order barring entry to the United States for refugees, immigrants and others from several majority-Muslim countries, the leaders of the Union for Reform Judaism, the Central Conference of American Rabbis and the Religious Action Center of Reform Judaism, issued the following statement on behalf of the Reform Jewish Movement:
“The Reform Movement denounces in the strongest terms the horrifying executive order on immigration and refugees issued late Friday evening by President Trump. The order signed yesterday is even worse than feared, barring entry of all Syrian refugees, imposing in essence a religious test for entry to the U.S., and refusing entry to any individual coming from a list of majority-Muslim nations–betraying even those individuals who have supported our nation's military efforts in Iraq, Afghanistan and elsewhere. Families are now being held apart and countless individuals who have served our nation in the most difficult circumstances are in jeopardy.
“The Reform Movement called on the President not to sign a discriminatory order banning refugees and others entering from several majority-Muslim nations. Tragically, he did not heed our call or those from countless other people of faith, humanitarians, and foreign service and military veterans. Reports of families separated at our nation’s airports are gut-wrenching. As Jews, we know the impact that xenophobia and religious profiling have on all people whose lives are endangered by exclusionary laws.
“We have not forgotten our charge: ‘When a stranger resides with you in your land, you shall not wrong him. The stranger who resides with you shall be to you as one of your citizens; you shall love him as yourself, for you were strangers in the land of Egypt.’ (Leviticus 19:33-34)
“The world is learning that under the Trump Administration, America does not honor its commitments to people or to the values that have been a source of strength and moral leadership since our founding. This executive order will give credence to those stoking the flames of religious hatred, making citizens of every nation on earth, including the United States, less safe for years to come.
“We call on President Trump to rescind this abhorrent executive order. Every member of Congress must denounce its provisions, including the imposition of a religious test for entry, and urge its immediate repeal. Every American citizen must take every possible action to oppose this violation of America's greatness.
"In the days, weeks and years that follow, we will work with our clergy, lay leaders, institutions and congregations to provide assistance and support to immigrants, refugees, asylum-seekers and others yearning for the refuge and opportunity for a better life that we know the United States, at its best, can provide.”
Union for Reform Judaism
Daryl Messinger, Chair, North American Board of Trustees
Rabbi Rick Jacobs, President
Central Conference of American Rabbis
Rabbi Denise L. Eger, President
Rabbi Steven A. Fox, Chief Executive
Religious Action Center of Reform Judaism
Isabel P. Dunst, Chair, Commission on Social Action of Reform Judaism
Rabbi Jonah Dov Pesner, Director
###
The Religious Action Center of Reform Judaism is the Washington office of the Union for Reform Judaism, whose nearly 900 congregations across North America encompass 1.5 million Reform Jews, and the Central Conference of American Rabbis, whose membership includes more than 2,000 Reform rabbis. Visit www.rac.org for more.

Posted by Congregation Adas Emuno at 9:00 AM