Merrill Steinberg was another member of our religious school's Confirmation class who took part in our Shavuot ceremony on May 18th (see our previous posts, Preparing for Shavuot and Confirmation 2010).  Below, we see him preparing for the Torah reading prior to the start of our Shavuot service: 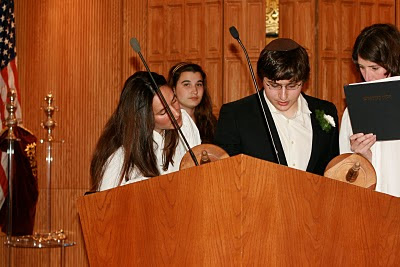 And here is his confirmation speech, which he generously made available to us:

Merrill Steinberg
Until I took confirmation I had always regarded Judaism as only a religion. I never really felt very Jewish because I never was very religious. But confirmation changed all this. After 3 years of analyzing how Judaism applies to everyday situations, I realized that Judaism is more than just a religion, it is a set of guidelines and laws describing how to have a peaceful and just society. Without this realization I would never have had the respect for Judaism that I have now and I would have never considered myself Jewish in the way that I do now, not as a follower of the religion, but as a Jewish citizen.
And one more look at Merrill just prior to the start of Shavuot: 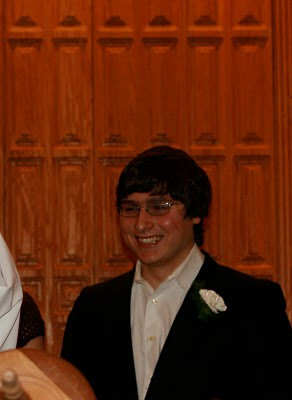 Congratulations to Merrill and the Steinberg family from the entire Adas Emuno Community!