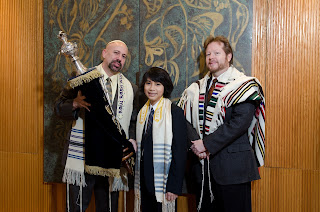 Jacob Galperin was Bar Mitzvah on December 3rd, 2011, and as you can imagine, it was an occasion of great happiness and pride for his family, and for all of us at Congregation Adas Emuno. In the photograph here you can see Jacob (center) with Rabbi Barry Schwartz (left) holding the Torah, and Student Cantor Luke Hawley (right), standing in front of the Ark.  And we are very pleased to welcome Jacob as a Guest Blogger here on our congregational blog, as he was kind enough to share with us his D'Var Torah.

My Torah portion is the famous story of Jacob's, Vayeitzei,  which means, and he went out.  This is when Jacob left Beersherba for the city of Haran, Rebekah's birthplace.

Jacob stops to rest his first night.  He places a stone as a head rest and then dreams of a ladder set upon the ground reaching heaven, with angels climbing up and down.

When Jacob awakens he makes a pact with God. If God kept him safe, Jacob would make him his God.

Jacob continues his journey to Haran to find his mother's brother, Uncle Laban.  In no time at all, Jacob was united with Uncle Laban, Leah, and Rachel.
Jacob tells the story of his dream.  Laban was so happy about all that had occurred. Jacob was in love with Rachel, the prettiest and youngest of the two girls.
Jacob asks Laban to marry Rachel, and that night Laban brought the bride to the tent.  The next morning Jacob finds out it was Leah along with her maid.
OMG! as we would say... Someone told a lie!
Jacob marches over to Laban's tent for an explanation and Laban tells him, "Not to worry...  The oldest daughter must be married first, however, so if you still want to marry Rachel, work for me seven years and she will be yours, with her maid."
He takes the deal.
II
Theme
The theme I have chosen is dishonesty, and the lack of bravery that is needed to tell the truth.
Rachel's father was dishonest with Jacob by sending Leah to Jacob's tent.  He then rationalized his lie with the truth that he was not brave enough to communicate beforehand. Perhaps like many of us, he was afraid Jacob would have said no, and his first child would be considered an outcast. Thus, Laban was willing to sin because he saw God's will directing him to care for his first born before his own soul.
We also know that Leah and her maid gives Jacob ten children and Rachel and her maid blesses Jacob with two children.
III
Discussion
According to my study, dealing with dishonesty is a question for us to ask ourselves. What is the Torah telling us,  how should we treat a person who is dishonest and may be stealing from us?
Jacob investigated Laban when it came to Leah. He asked many questions, and he kept his dignity.  He did not yell, he did not lose his temper.  He did not attack Laban, and kept his emotions in check. Some commentators would say Jacob's handling of Laban is a good way to handle a situation like this.
Also, the Torah teaches us lessons in human conduct and self control, and anger is the emotion that should be used only in the last resort and then only in a controlled, thought out, and constructed form of communication versus an outburst.
I picked this theme because I find this part to be fascinating, and I can relate to being not brave enough to tell the truth at times, and obviously I have lied for the same reason.  I lied to my mother a long time ago because I didn't want to do my homework, and if I told her the truth, she would make me.  The part that is different here is that I was lying for my own selfish reasons, unlike Laban who lied, let's say, for the greater good.  And perhaps God said it was okay by blessing Leah with ten children, while Rachel had only two children.
IV
My Mitzvah Project
My Mitzvah Project will be occurring after my Bar Mitzvah due to a situation beyond my control.  They say there are no coincidences.  I have chosen to help the Cantor help the new Bar Mitzvah  students on Sunday.  I would like to thank all of you for being here, and just being awesome. I would also like to especially thank my Mom, Cantor Luke, and Rabbi Schwartz.  Without them. I wouldn't be here today.
V
My Preparation
My preparation has changed my view of Judaism. I have learned that it isn't so easy to become Bar Mitzvah. A lot of time has to be spent to make sure that everything sounds right and that everything goes perfectly. I have learned that now is my time to show that I can lead a service, and that I am a child of Jacob. Preparing has also shown me that although now I may be reluctant to come to synagogue and to return to religious school, I know that it's the best thing for me to do. God will always be there for me and I will always be there for Him, so I know that I would love to sacrifice the hour long services on the weekends for him. 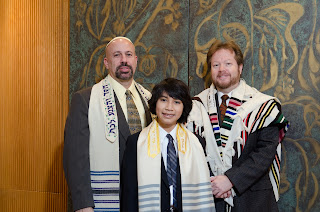 And with that we offer our gratitude to Jacob and his mother Susan Galperin for sharing his D'Var Torah with us. And on behalf of Congregation Adas Emuno, we extend a warm and joyful Mazel Tov to the entire Galperin family!