Steven Chartoff was Bar Mitzvah on January 21, 2012, and we join together in saying Mazel Tov! to Steven and his family.  Here now is his D'var Torah:

I Have Chosen to write about the beginning of Exodus, when G-d was instructing Moses to take the Israelites from Egypt.  Moses told G-d that Pharaoh would not listen to him when he asked for freedom.   This was an important part of Jewish history. G-d told Aaron and Moses, “bring forth the Israelites from the land of Egypt, troop by troop.”  Moses said, “See, I get tongue-tied; how then shall Pharaoh heed me?”  G-d replied, “See, I place you in the role of G-d to Pharaoh, with your brother Aaron as your prophet.  You shall repeat all that I command you, and your brother Aaron shall speak to Pharaoh to let the Israelites depart from this land.”


G-d told Moses: “When Pharaoh speaks to you and says ‘produce your marvel’ you shall say to Aaron, ‘take your rod and cast it down before Pharaoh’.  It shall turn into a serpent.” Moses and Aaron did as the Eternal One commanded. After seeing this, the Pharaoh called his sorcerers and sages, and their rods turned into serpants also, but Aaron’s rod swallowed their rods.  And still, Pharaoh did not let the Israelites go.


If Moses and Aaron were not successful in getting the Pharaoh to agree, every Jew would probably still be a slave in Egypt.  As each plague came upon the Egyptians, the Pharaoh would seem to agree to let the Israelites leave Egypt, but then he kept changing his mind. Finally, after the 10 plagues came down upon all of Egypt, the Israelites were allowed to leave.

Fortunately, I have not experienced anything like Pharaoh’s stubbornness. It is good that I didn’t, because I do not enjoy arguments. People who argue tend to get mad at each other. I do not enjoy anger or suspense. I usually try my best to get along with people.

For my Mitzvah Project, my two friends and I will play at a retirement home. We will do songs we did during marching band in the past few months. We also will do some jazz music that we performed last year. Most old people love music, the kind they used to listen to when they were younger.

For my Bar Mitzvah, I’d like to thank my parents for reminding me to practice. All of my teachers and classmates from the last 4 years, Cantor Luke for teaching me the verses, and Rabbi Schwartz for helping me with this speech.

When I was in 3rd grade, I started going to Hebrew school here. I honestly did not like it. There are still moments today when I don’t want to be there, mostly because I want to sleep. Sometimes I still rest my head on my books and close my eyes, but still pay attention. Eventually I’ll go to college, have a home, and probably teach younger family members about Judaism and how it’s important to us, from generation to generation. Next year I believe with an 80% chance I'll go to confirmation class. Shabbat Shalom! 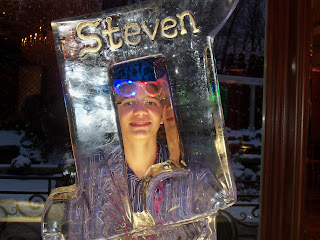 And thank you, Steven, for sharing your D'Var Torah here, as a guest blogger!  We certainly hope to see and hear more from you in the future!

Posted by Congregation Adas Emuno at 11:13 AM