Benjamin Strate was another of our four religious school students who participated in the Confirmation ceremony this past Shavuot Festival, which took place on May 18th (see our previous posts, Preparing for Shavuot and Confirmation 2010). 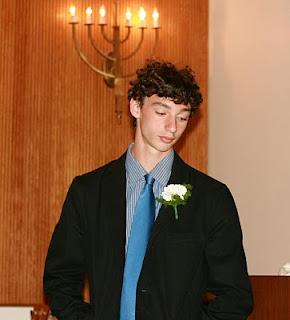 Benjamin has also been good enough to share with us his confirmation speech:

Benjamin Strate
Good evening friends, family and fellow congregants. My fellow Confirmands and I have been asked to say a few words to the Jewish community. I would like to talk about us as a community being the chosen people.
When you first hear chosen people, many think God chose us. I personally thought the same until, I started going to confirmation class. I have learned many things there, but none as interesting as the truth behind "the Jews as a chosen people."
The statement itself is a little misleading. The story goes that, God went around among the many nations of the ancient world, offering the Torah and its 613 laws. No nation wanted to accept the responsibility that came with those laws until God met Moses on Mount Sinai, and at that time we accepted all 613 laws and commandments. We are not called the chosen people because God chose us to receive the commandments, but because WE CHOSE to receive the commandments.
By choosing the commandments we chose to accept responsibility. As a people, we chose to be responsible for keeping a safe and civilized community, for upholding justice and mercy, compassion and respect. Without laws we might live in chaos and anarchy.  With laws, we also understand that everyone will be judged equally, that every person is equally important, that we believe in equality.  We also accepted the responsibility for interpreting the laws, for studying their meaning and interpretation, and for reinterpreting them for each new situation and era.
And by accepting responsibility for all 613 laws, we  did not promise perfect obedience.  We accepted that we are not perfect, that we are human and make mistakes.  Accepting responsibility means that we should know right from wrong, and that we should strive to better ourselves at all times.
Today my fellow Confirmands and I have been confirmed into the Jewish community. We are adults now, and must accept responsibility for ourselves and for each other, we must strive to be better individuals and to make a better world for all to live in, much as we as a people did, when we accepted God's 613 commandments.

And here we seem Benjamin again, as he prepares for his Torah reading prior to the beginning of the Shavuot service: 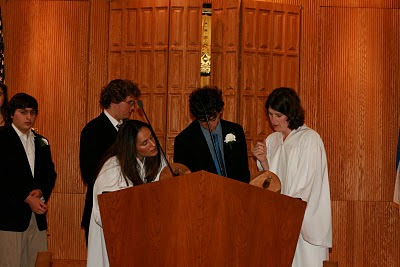 Mazel Tov to Benjamin and the Strate Family from the entire Adas Emuno Community!
Posted by Congregation Adas Emuno at 11:23 PM