On Being Jewish in China

On August 16th, an article by Bob Davis appeared in the Wall Street Journal entitled, Chinese Jews Face Existential Questions. The subtitle reads, Divided and Diminished: In Eyes of Judaism as Well as Beijing, Tiny Kaifeng Community Isn't Quite Kosher.  The article begins with

Zhang Xinwang, a moon-faced Chinese man with a spiky beard, calls himself "Moishe."

"So do you think I look Jewish?" he asks.


Readers can answer that question for themselves, as a picture of Moishe is included: 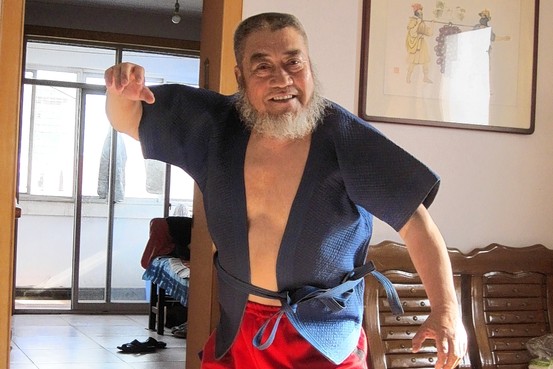 The question of whether someone looks Jewish is an old one, both for the Jewish community, and for the non-Jews we have lived side-by-side with.  And while there have traditionally been certain features that were considered stereotypical of Jewish faces, the fact is that the line, "funny, you don't look Jewish" has come to be the rule rather than the exception.  As much as tradition has stressed marriage within the tribe, intermarriage has always been a part of Jewish life over the millennia of diaspora, and most certainly in Biblical times, as our Holy Scriptures attest to.

Of course, as a progressive, Reform congregation, Adas Emuno embraces diversity and Jews of choice, and welcomes everyone who wishes to join our spiritual community.  Unfortunately, others are not as open as we are, as the article goes on to explain:

The handful of Kaifengers who go to Israel are sometimes floored to discover they need to go through a rabbi-certified conversion to be accepted as Jews, while the ones staying home squabble over which of them are really Jewish.

The question has surprising consequences in this dusty walled city in central China. According to the Chinese government, there are no Kaifeng Jews because there are no Chinese Jews. Judaism isn't one of China's five official religions and Jews aren't designated as one of the country's 55 official minorities. Orthodox Jews have a similar view, though for different reasons. Kaifeng Jews trace their heritage through their father, as Chinese traditionally do, while orthodox Jews define Judaism as passing through the mother.


It is unfortunate that the Jews of Kaifeng are unfamiliar with the Reform movement in Judaism, because within Reform, patrilineal descent is considered acceptable.  Even more unfortunate is the fact that the State of Israel does allow the Reform or Conservative branches of Judaism the same status as the Orthodox. Although some progress has been made, it is not nearly enough, and it is truly sad that this small group of Chinese Jews who have resisted assimilation for so long, and maintained their Jewish identity is such an inhospitable political climate, should have their heritage questioned and denied in this way.  As the article explains

"They may stem from Jewish ancestry, but they aren't Jewish," says Rabbi Shimon Freundlich, who runs the orthodox Chabad House in Beijing. "There hasn't been a Jewish community in Kaifeng in 400 years."

Except there is one, though it's divided and diminished. Somewhere between 500 and 1,000 people in the city say they are descendants of Kaifeng Jews and cling to at least some Jewish traditions. A canvas poster at No. 21 Teaching the Torah Lane announces the street as the site of a synagogue that was destroyed in an 1860 flood and never rebuilt. Inside a tiny courtyard house, "Esther" Guo Yan works as a tour guide and sells knick-knacks decorated with Jewish stars.


When tourists stop by, she quizzes them on Jewish ceremonies, like what prayers to say when lighting Sabbath candles. She says she hasn't yet managed to fast a full day on Yom Kippur, though she is trying. As the granddaughter of a Kaifeng Jew, she says the orthodox standard on Judaism is unfair: "We read the Torah with Eastern thoughts; deal with it."

You have admire her spirit, as well as her dedication.  And it would be fascinating to learn more about how they read Torah with Eastern thoughts.  Funny to recall that we Jews were once considered "orientals" as we migrated from the Middle East to European lands.


And what a wonderful, and wonderfully Chinese name for a street, Teaching the Torah Lane!  A photograph of what it looks like today is also provided: 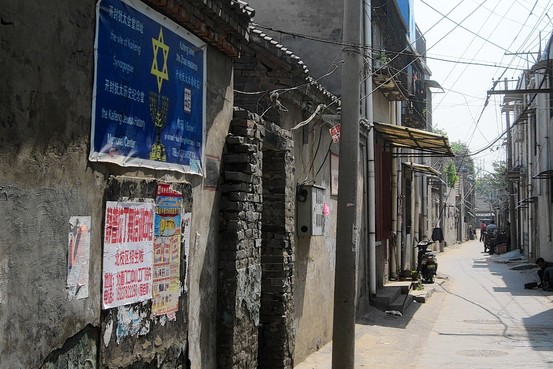 The caption reads, Kaifeng's last synagogue, destroyed in an 1860 flood, stood at "Teaching the Torah Lane," now an alley of courtyard houses.  The article continues with some historical background:

The first Jewish merchants arrived when Kaifeng was in its heyday as the Song dynasty capital. They married the local women and rose to become mandarins and military officials. Over the centuries they blended in ethnically and were forgotten by the world until 1605, when a Jewish scholar from Kaifeng, Ai Tien, met Jesuit missionary Matteo Ricci in Beijing. The missionary then spread the news that Jews had been living in China for centuries.

The Kaifeng Jewish population is thought to have peaked at around 5,000, but by the early 1900s, none could read Hebrew and the community's Torah scrolls were sold to collectors. Jews were called "the Muslims with the blue caps," referring to the color of the yarmulkes some still wore.

"In our family, we didn't eat pork, that's for sure," says Nina Wang, a 24-year-old Kaifeng native who now lives in Israel and underwent orthodox Jewish conversion. The family had menorahs and Sabbath cups, she said, "but we didn't know what to do with those things."

Ms. Wang's story is not unlike those of the Marranos, the Jews from Spain and Portugal who were forced to convert to Christianity after the 1492 expulsion, many of whom continued to practice Jewish rituals in secret, and passed them on through the generations, to this very day.  For the Jews of Kaifeng, a certain amount of reconnection came about on account of the Holocaust, and continues to this day, but remains difficult:

When thousands of European Jews settled in Shanghai in the 1930s and 1940s to escape the Holocaust, a few Kaifengers went there to study. But the Shanghai Jews were focused on aiding those persecuted in Europe.

After the Communists took over in 1949, Mao Zedong and Deng Xiaoping fretted that Kaifeng Jews might be subversive. In a 1953 document, they wrote that the "Kaifeng Jewish community is disclosing secrets to the overseas communities and causing trouble."

Even so, Kaifeng Jews say they weren't singled out for discrimination. Ms. Guo says that her friends used to tease her, saying she must be smart and good at making money—common Chinese stereotypes of Jews— but she didn't feel threatened.

As China opened again to foreigners in the 1980s, Jewish tourists, Christian missionaries and foreign academics made their way to Kaifeng, each doling out different advice. Xu Xin, a non-Jewish professor of Jewish studies at Nanjing University, said some Kaifengers turned to him as a kind of rabbi to ask whether or not they were Jewish. He demurred.

These days, many in Kaifeng turn to Timothy Lerner, who calls himself a "messianic Jew"—meaning he was born Jewish but believes in Christ as the Messiah—to learn Hebrew and Jewish customs. Mr. Lerner acknowledges that his visa was revoked by the Chinese government in 2006 for evangelizing, but says he doesn't try to convince anyone to follow his religious beliefs. He says he set up the "Kaifeng Israel School" to help Kaifeng Jews "learn the Jewish lifestyle" and move to Israel, where about a dozen of them have taken up residence, thanks largely to funds from Shavei Israel, an Israeli group.

Others in the Jewish community are suspicious. Shi Lei, one of the first Kaifeng Jews to study in Israel, blames Mr. Lerner for "creating factions" in the tiny community with his school, though Mr. Lerner says Mr. Shi misunderstands his efforts.

We can only have sympathy for the difficulties that this community faces, and especially in regard to the Chinese government:


Today, Kaifeng Jews tread with caution given China's ban on unauthorized religious activity. The Jewish descendants say they rarely meet in groups of 10—the number required by Jewish law for a religious service—for fear the government might consider that a political gathering. They make DVDs of themselves wearing traditional Chinese garb while they light Sabbath candles, to portray the act as a folk custom.

Passover is celebrated as a restaurant meal, not as a religious gathering, though some pass out matzos sent from Hong Kong.

As for Jewish tourist sites, there isn't much to see. Several stone tablets from different Kaifeng synagogues are stored in an unmarked, padlocked room in the Kaifeng Municipal Museum.

Some of the city's notables (none of whom are Jewish) are looking to boost tourism by rebuilding the Kaifeng synagogue, but as a museum so as not to inflame the Chinese government. "You could have tourists stay a night with local Jewish descendants to see what their lives are like," says Su Linzhong, a management professor at Kaifeng University. "They are so emotional about their grandparents."


We really have to wonder what the Chinese government could possible find so threatening about the existence of a Jewish community. Might it have something to do with the value we place on freedom and social justice?  If nothing else, this story provides food for thought, especially when we're looking to go out to eat on Christmas Eve.