Eric Weiner's opinion piece in yesterday's New York Times, entitled, Americans:  Undecided About God?, speaks to some important points about the status of organized religion in contemporary American society, and the relevance of Adas Emuno as part of the movement known as Reform Judaism.

Weiner begins by invoking the holiday season and its discontents:

The holidays are upon us again — it sounds vaguely aggressive, as if the holidays were some sort of mugger, or overly enthusiastic lover — and so it’s time to stick a thermometer deep in our souls and take our spiritual temperature (between trips to the mall, of course).

For some of us, the season affords an opportunity to reconnect with our religious heritage. For others, myself included, it’s a time to shake our heads over the sad state of our national conversation about God, and wish there were another way.

For a nation of talkers and self-confessors, we are terrible when it comes to talking about God. The discourse has been co-opted by the True Believers, on one hand, and Angry Atheists on the other. What about the rest of us?

It is certainly the case that the news media tend to focus on the two extremes.  After all, conflict makes for good drama, and drama is what attracts an audience.  But Weiner wants to frame this issue via demographics, and the formation of a new demographic category:

The rest of us, it turns out, constitute the nation’s fastest-growing religious demographic. We are the Nones, the roughly 12 percent of people who say they have no religious affiliation at all. The percentage is even higher among young people; at least a quarter are Nones.


Apparently, a growing number of Americans are running from organized religion, but by no means running from God. On average 93 percent of those surveyed say they believe in God or a higher power; this holds true for most Nones — just 7 percent of whom describe themselves as atheists, according to a survey by Trinity College.


Nones are the undecided of the religious world. We drift spiritually and dabble in everything from Sufism to Kabbalah to, yes, Catholicism and Judaism.

Weiner makes this sound like a new trend, but it is well documented that affiliation with organized religion has been in decline in the United States for over half a century now.  So perhaps what has changed is people's willingness to admit to it, and to identify themselves as having no affiliation whatsoever, as well as their willingness to experiment and mix and match among existing spiritual traditions.  Indeed, often individuals who distance themselves from religion at the same time embrace other forms of spirituality, which goes to Weiner's point about belief in a higher power divorced from identification with organized religion.  One reason may be that, in some instances, religions turn to matters other than those of the spirit:

Why the rise of the Nones? David Campbell and Robert Putnam, of the University of Notre Dame and the Harvard Kennedy School, respectively, think politics is to blame. Their idea is that we’ve mixed politics and religion so completely that many simply opt out of both; apparently they are reluctant to claim a religious affiliation because they don’t want the political one that comes along with it.


We are more religiously polarized than ever. In my secular, urban and urbane world, God is rarely spoken of, except in mocking, derisive tones. It is acceptable to cite the latest academic study on, say, happiness or, even better, whip out a brain scan, but God? He is for suckers, and Republicans.

I used to be that way, too, until a health scare and the onset of middle age created a crisis of faith, and I ventured to the other side. I quickly discovered that I didn’t fit there, either. I am not a True Believer. I am a rationalist. I believe the Enlightenment was a very good thing, and don’t wish to return to an age of raw superstition.

So, health and aging put the "fear of God" into Weiner, or at least reminded him that there is more to life than our everyday concerns.  He does not detail what "the other side" was that he looked to, but I suspect that it wasn't Reform Judaism.  The Reform movement was a product of Enlightenment rationalism, and is it truly irrational to say that there is something more to the world than the things that we are aware of, more than human knowledge can encompass, or ever can fully understand?  And is it truly irrational to say that we Jews have an amazing, millennia-old evolving tradition that is worth maintaining and being a part of, just as it is worth the effort to adjust and adapt it to changing circumstances and changing times, that is, to continually take part in a process of reform?
Weiner goes on to say,

We Nones may not believe in God, but we hope to one day. We have a dog in this hunt.

And Reform Jewish congregations, such as Adas Emuno, are places where people go a'hunting for spiritual experience, for discovering for themselves their own individual understanding of and relationship to the divine.  And this same Jewish tradition is also one that emphasizes ethics, that above all else seeks to answer the question of how we should live our lives, to live them in a way that is consonant with the sacred and divine dimensions of creation, and in a way that does not harm others, and works towards the benefit of all human beings and of all living things.  Weiner goes on to note,

Nones don’t get hung up on whether a religion is “true” or not, and instead subscribe to William James’s maxim that “truth is what works.” If a certain spiritual practice makes us better people — more loving, less angry — then it is necessarily good, and by extension “true.” (We believe that G. K. Chesterton got it right when he said: “It is the test of a good religion whether you can joke about it.”)


By that measure, there is very little “good religion” out there. Put bluntly: God is not a lot of fun these days. Many of us don’t view religion so generously. All we see is an angry God. He is constantly judging and smiting, and so are his followers. No wonder so many Americans are enamored of the Dalai Lama. He laughs, often and well.

Ummm. Judaism and humor?  Hello????  Oh well, he is addressing American society as a whole, and Judaism represents only a small portion of that population.  So, anyway, Weiner continues with,

Precious few of our religious leaders laugh. They shout. God is not an exclamation point, though. He is, at his best, a semicolon, connecting people, and generating what Aldous Huxley called “human grace.” Somewhere along the way, we’ve lost sight of this.

God is a semicolon?  Maybe, in the sense that there are very few people left who understand or know how to use one.  Actually, I like the Kabbalistic Rabbi David A. Cooper's view better, as he says that God is a verb.  Anyway, it does seem that much of the criticism here is directed against the public face of organized religion:

Religion and politics, though often spoken about in the same breath, are, of course, fundamentally different. Politics is, by definition, a public activity. Though religion contains large public components, it is at core a personal affair. It is the relationship we have with ourselves or, as the British philosopher Alfred North Whitehead said, “What the individual does with his solitariness.” There lies the problem: how to talk about the private nature of religion publicly.

It used to be that religion and politics were subjects that were not brought up in public, in polite society, but then again, manners have kind of gone the same route as organized religion.  So what does Weiner conclude?

What is the solution? The answer, I think, lies in the sort of entrepreneurial spirit that has long defined America, including religious America.


We need a Steve Jobs of religion. Someone (or ones) who can invent not a new religion but, rather, a new way of being religious. Like Mr. Jobs’s creations, this new way would be straightforward and unencumbered and absolutely intuitive. Most important, it would be highly interactive. I imagine a religious space that celebrates doubt, encourages experimentation and allows one to utter the word God without embarrassment. A religious operating system for the Nones among us. And for all of us.

I don't know, maybe Weiner was thinking of some of those cartoons that appeared after Jobs passed away... 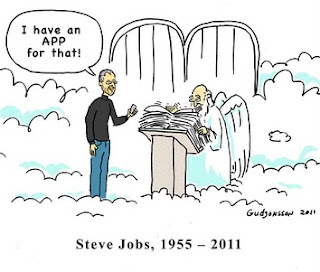 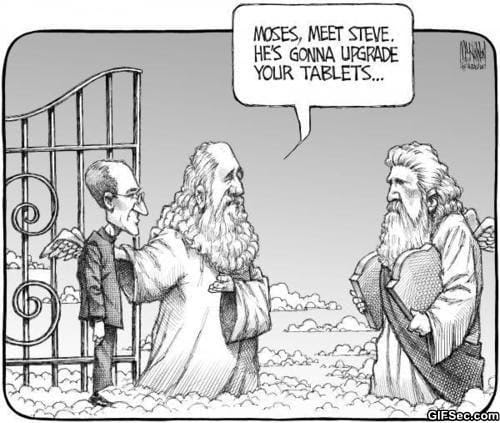 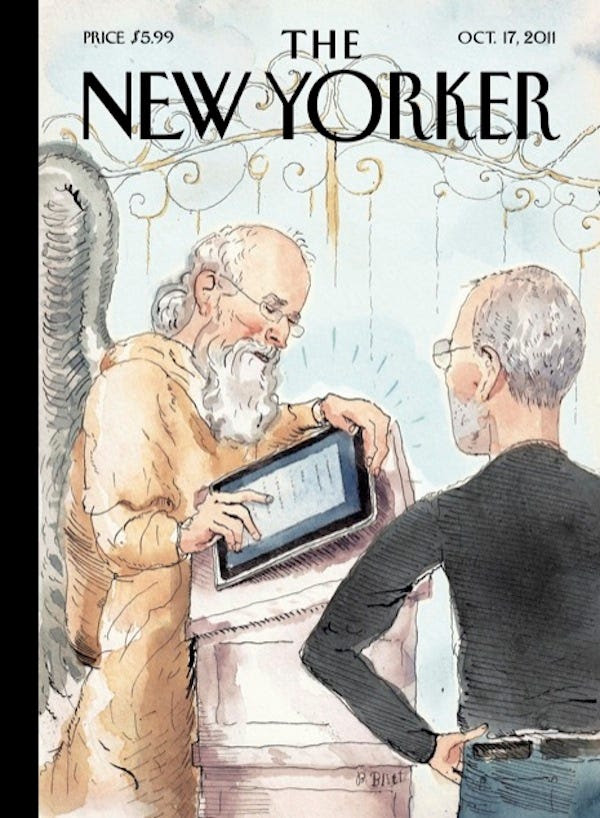 Whatever the reason, he might consider the fact that there is no need to reinvent the wheel, that to find everything he's looking for, he doesn't have to journey to New Delhi or Kathmandu or Tokyo or Tibet.  He can find it all right here, in the New York Metropolitan Area, across the river in northern New Jersey, in Bergen County, in the town of Leonia, in our little Congregation of Adas Emuno.  You are very welcome to come and join us for Shabbat evening services sometime, Eric, and see what you think.  And otherwise, we wish you the best in your seeking, may you find what you're looking for.
Posted by Lance Strate at 4:16 PM