The Secular Jew Who Transformed Judaism

In case you missed, an article written by our own Rabbi Schwartz was published in the Summer 2014 issue of Reform Judaism magazine. You can read the article, The Secular Jew Who Transformed Judaism, online by clicking on the title, and take a look at the entire magazine issue online via issuu.com. But we know you also want us to post the article here, so here goes:

The recent Pew Research Report found that an astounding one third of all U.S. Jews under the age of 30 call themselves Jews of no religion. If that seems problematic to us today, the very thought that one could be Jewish without Judaism was inconceivable to our ancestors. All that changed on July 27, 1656, the day the leaders of Talmud Torah, the Portuguese Jewish Community of Amsterdam, excommunicated 24-year-old philosopher Baruch Spinoza (1632–1677).

Although the writ of excommunication did not specify Spinoza’s “abominable heresies,” we know from his later published works that he denied almost every major tenet of traditional Jewish belief, including that God created and controls the world, that God makes ethical demands on us, that the Torah is the revelation of God’s will, and that Jews are God’s chosen people. He also dared to criticize religion—all religion—for propagating untruths and fostering dogma and superstitions that had led to great evils perpetrated in the name of God.

Spinoza’s faith was the faith in reason. Reason alone, he asserted, could uncover truth, herald the building of an enlightened and tolerant society, and serve as the path to personal spiritual fulfillment. “I call him free who is led solely by reason,” Spinoza wrote, adding that “The highest activity a human being can attain is learning for understanding, because to understand is to be free.” He considered the perfection of reason to be our most meaningful task. “In this alone,” he said, “man’s highest happiness, or blessedness consists.”

While Spinoza’s excommunication isolated him from his family and friends, it did not cause him to repent or his ideas to wither. Rather, he went on to publish his magnum opus, Tractatus Theologico-Politicus (1670), as well as Ethics (1675), earning him the reputation of being the most brilliant and controversial philosopher of his age.

Even though he never again had contact with the Jewish community, Spinoza did not renounce his Jewishness. He declined all overtures to convert to Christianity and continued to study traditional Jewish thought—if only to refute it. His home library was full of Jewish books. He studied Hebrew in order to be able to read the Torah in the original language, and was said to be working on a book of Hebrew grammar at the time of his death.

In short, in being the first great Jewish philosopher to adopt an ideology of pure reason, to the utter exclusion of revelation, Spinoza also became the archetype of the secular Jew. And, as a secular Jew, he offered ideas that have profoundly impacted Jewish thought and belief ever since. 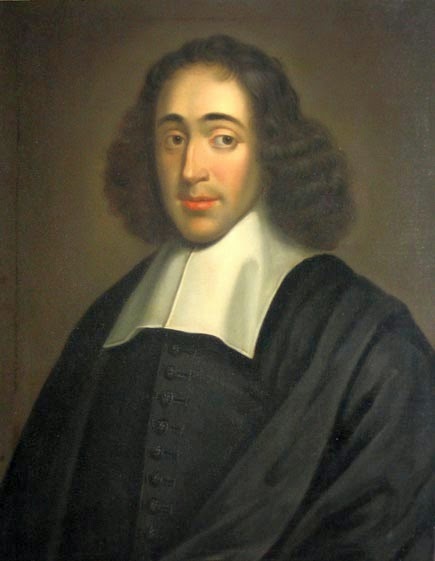 While the founders of Reform Judaism rejected Spinoza’s most radical notions about God, they nevertheless rooted Reform Judaism in Spinoza’s idea that “[we must] make a fresh examination of Scripture with a free and unprejudiced mind.” Reform Movement pioneer Rabbi Abraham Geiger (1810–1874), for example, echoed Spinoza in insisting that “the treatment of the historical content of the Bible…must be subject to all laws which may be termed the science of history.” Reform theologian Kaufmann Kohler (1843–1926), former president of the Hebrew Union College, acknowledged that “systematic critical investigation of the Bible began with Baruch Spinoza.”

Spinoza’s assertion that the Bible should be critically examined from the viewpoint of the “science of history” also influenced Reform Judaism’s major platforms of beliefs and principles through the 19th and 20th centuries. The Pittsburgh Platform of 1885 asserted: “We hold that the modern discoveries of scientific research in the domains of nature and history are not antagonistic to the doctrines of Judaism.” A half century later, the Columbus Platform (1937) proclaimed: “The new discoveries of science…do not conflict with the essential spirit of religion.” The San Francisco Platform of 1976 declared: “Scholarship needs to be conducted by modern, critical methods.”

Spinoza’s influence would extend to the Zionist enterprise as well.

In the years before Israel’s statehood, Zionists seized upon Spinoza’s teachings, beginning with his oft-quoted assertion that “given the opportunity…[the Jewish people] may establish once more their independent state.” The early European Zionist Moses Hess wrote that “Spinoza conceived Judaism to be grounded in nationalism, and held that the restoration of the Jewish kingdom depends entirely upon the will and courage of the Jewish people.”

Spinoza also taught that “the true aim of government is liberty.” He asserted: “The ultimate aim of government is not to rule, or restrain by fear, nor to exact obedience, but to free every man from fear so that he may live in all possible security…” (“That in a Free State Every Man May Think What He Likes, and Say What He Thinks”).

Indeed, the Zionists found in Spinoza a secular saint who championed reason and science, separation of synagogue and state in opposition to rabbinic authority, secular Jewish identity, and a system of governance that found expression in Israel’s Declaration of Independence (1948), which guarantees “freedom of religion, conscience, language, education, and culture.”

The Zionist love affair with Spinoza was in full evidence in late 1953, five years after Israel’s birth and three years in advance of the 300th anniversary of the philosopher’s excommunication, when Israel’s first Prime Minister David Ben-Gurion published “Let Us Amend the Injustice” in the Hebrew daily Davar. Calling Spinoza “the deepest, most original thinker to emerge [from our people] from the end of the Bible to the birth of Einstein,” he urged Hebrew University to publish Spinoza’s collected works in Hebrew. He also queried the chief rabbis as to whether Spinoza’s banishment still applied, saying that the free citizens of modern Israel could no longer accept it. The widely read article was hotly debated, underscoring the gulf that had emerged between the secular and religious factions in Israel.

In many ways all of us are “Spinoza’s children,” for Spinoza’s ideas changed the Jewish worldview. Even though he himself was anti-religious, he helped lay the groundwork for a modern Judaism that integrates reason with faith and honors freedom of thought and practice. He inspired the notion of a secular Jewish identity and championed democratic ideals that played a role in the Zionists’ conception of the fledgling Jewish state.

In his day Spinoza was cast out of the Jewish community for his dissenting views on religion. Today, with one of three Jews under 30 calling themselves Jews of no religion, we marginalize secular Jews at our own peril.


And let's not forget about these fine books:


It can truly be said that Enlightenment begins with Spinoza!