Our friend Joanne Palmer, editor of the Jewish Standard, published an article on this year's Sweet Tastes of Torah that is worth noting here on the congregational blog of Adas Emuno.

The title of the article is Character Matters, The Prophets Say. The subtitle of the article, which was published in the January 19th issue, is "This year’s Sweet Tastes of Torah includes a talk on prophetic literature; also havdalah, dessert, and dancing," and here's how it begins:

In some ways, everything is different this year.

In other ways, things are the same; we build on successes and learn from missteps. The Sweet Tastes of Torah, the annual program that offers the community workshops with local rabbis, all of them members of the North Jersey Board of Rabbis, has been going strong for almost a decade now. About 18 Conservative and Reform rabbis will teach two sessions of classes on February 3 at the Fair Lawn Jewish Center.

But this year, in response to the increased urgency that many people feel to do something, to understand more about what they can do and to know more about the Jewish context that can nourish their instincts and actions, Sweet Tastes of Torah is reshaping the evening.

It will begin with the usual spirited Havdalah, and it will end with the usual and much-anticipated dessert, as well as Israeli folk dancing (to even out the dessert), but it will include a keynote address, which will provide the focus for all of the first session’s workshops and some of the second.

So far, so good, you may say, but what really makes this year's event different from all other years, you may ask. Well, then, read on!

The keynote speaker is Rabbi Barry Schwartz, who heads Congregation Adas Emuno in Leonia and is the CEO and editor-in-chief of the Jewish Publication Society. In what must have been his abundant spare time (assuming that either he never sleeps and has figured out a 36-hour day), he has written Path of the Prophets. The latest of his books—he wrote a children’s book, Adam’s Animals, that came out in October—looks at some of the prophets—both the obvious ones, like Isaiah, Jeremiah, and Ezekiel—and biblical figures who were not called prophets but who functioned in that way, characters including Judah, the midwife Shifrah, and Ruth.


Although Rabbi Schwartz worked on his book for five years, he said, and therefore he began the work well before today’s political situation evolved, “it just so happens that it’s coming out at a time when we are so conscious of the ethical issues that are swirling around the presidency and also the #MeToo movement. This invitation to deliver the keynote came smack at the time when the Harvey Weinstein story was just breaking, and it seemed that every day there was a new story.

Because his book is about prophecy—and about ethical living, which prophecy demands—it seemed absolutely timely, he said, and that is a great sadness. “I thought that I was writing it in order to make my contribution to the conversation about the prophets,” he said. “They inspired me when I was younger, and I wanted to do that for the new generation.

“So many people try to read the prophets, and their eyes glaze over. So much of it is written in high rhetorical style, in a poetical prose that is very hard to digest. I wanted to write a book that makes the prophet’s works, and even their lives, accessible and relevant and compelling.”

He talked about his book’s structure, and how the workshops at Sweet Tastes will mirror that structure.

“The book is divided into three sections—justice, compassion, and faith—reflecting Micah’s admonition to ‘do justice, love mercy, and walk humbly with your God,’” Rabbi Schwartz said.

“Certainly we are seeing ethical crises of leadership, particularly political and sexual in nature; these crises are happening so fast that we can hardly keep up with them. My thesis is that the prophets of ancient Israel brought forth an ethical revolution, and we need to retrieve their often overlooked or forgotten messages today. It will help inform us, perhaps it will help steady the ship.

“We very much need to hear the prophetic message that every person has a responsibility to do their part. The prophets didn’t turn their ire just on the leaders, but on the people as well, and in some ways that is even more daring. If the leaders are making a mistake, we need to speak truth to power, but we also need to speak truth to the people, and to understand, as Rabbi Heschel put it, that especially in a democratic society, not all are guilty, but all are responsible.”

Rabbi Heschel, of course, is Rabbi Abraham Joshua Heschel, the 20th century Jewish theologian and political advocate whom Rabbi Schwartz counts as among his inspirations. So, he said, was the rabbi of the shul to which his family belonged when he was growing up, in Croton-on-Hudson in New York. “Rabbi Michael Robinson, of blessed memory, was a disciple of Heschel’s, and one of the dozen Reform rabbis who were arrested with Martin Luther King in St. Augustine,” he said. “He was a true advocate for social justice, and I grew up with him, listening to him quote King and Heschel and the Hebrew prophets.

“It was JPS that published Heschel’s book The Prophets in 1963, and I feel a great kinship as the head of the JPS with Heschel’s work.”


Rabbi Schwartz begins each of his chapters—each dedicated to one official or unofficial prophet—with a biographical sketch based on the information available in the Bible and fleshed out by his imagination. “I combine biography and theology by taking an episode from their lives that illustrates what their lives were about,” he said. “Sometimes the biographical bits in the text are sparse, but I elaborate on it by what I call creative first-person midrash. I have the prophets themselves speaking in the first person, and I take some poetic license to do it.”

Among the prophets Rabbi Schwartz writes about are Judah, who walks the “path of repentance,” he said. “Judah is the first character in the Bible who undergoes what we think of as repentance, and he changes.” And then there is Caleb the spy, “who had the audacity and the courage to stand up to his fellow spies, and he countered their terribly pessimistic report about the land they were about to enter with a more optimistic report. He was an example of someone whose spirit gave him the ability to stand forward.

“And the prophets are not all doom and gloom,” Rabbi Schwartz continued. “Some of it is about compassion, forgiveness, kindness, and hope. All of this is very much part of the prophetic message. That’s the second group, compassion. And then there’s the third one, walking humbly with your God. That’s the path of joy and faith and humility and wisdom; it’s more about internal characteristics.”

“I definitely will reference what is going on today,” Rabbi Schwartz said. “I am going to recall the names of so many people caught up in scandal today, without dwelling on any of the particular individuals or the details of their stories. But I do want to begin by painting a picture of the sordid state of affairs. I certainly will mention political figures and the figures in the worlds of entertainment and the like who have been caught up in political and sexual scandals, without going into detail.

“And then I will move directly to the message of the prophets, which is about not making ethics peripheral. They should be central to our lives.

“Character truly counts. To all those who say that our leaders’ character does not matter, the prophets would say that you can never separate character from the office. It’s reaffirming an old-fashioned message, that leadership is not just about a person’s ability, but about that person’s character. It’s not just about their ability but also their integrity.”

And then, of course, after all the discussion and soul-searching, there always is dessert.

The article also includes a nice picture of Rabbi Schwartz: 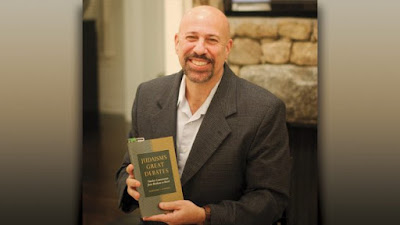 And it concludes with the following information:

Who: The North Jersey Board of Rabbis sponsors

What: Sweet Tastes of Torah

Where: At the Fair Lawn Jewish Center, 10-10 Norma Avenue

For more information, including a list of breakout sessions and teachers, and to register: Go to sweettastesoftorah.weebly.com or Google “sweet tastes of torah 2018”

We hope to see you there!